Last night the heavens opened and beauty descended to this corner of London creating a white paradise. The last time we had snow like this was 18 years ago.

A man sat at a metro station in Washington DC and started to play the violin; it was a cold December morning. He played six Bach pieces for about 45 minutes. During that time, since it was rush hour, it was calculated that a thousand people went through the station, most of them on their way to work.

Three minutes went by and a middle aged man noticed there was a musician playing. He slowed his pace and stopped for a few seconds and then hurried up to meet his schedule.

END_OF_DOCUMENT_TOKEN_TO_BE_REPLACED

We all back up all the time, donâ€™t we. So when our system crashes, weâ€™ll be up and running again without loss of vital documents, revenue, and with the least amount of hassle possible. We keep our back-ups in a safe place, off-site, and we rotate media according to hallowed rules devised by those in the know.

Hands up all those who do. I thought so. My excuse is that I find it difficult typing with my hands in the air.

Actually, Iâ€™ve always backed up, sort of. First onto a collection of floppies â€“ yes, they were very floppy, made of card and 5 Â¼ inch wide. Anyone still remember the Kaypro II, the first truly luggable computer after the Osborne? You had to have a service contract for it because the read-write heads would regularly go out of alignment. Ouch!

After having given up juggling dozens of floppies and recovering from the demise of SparqDrive Â­â€“ the company went the way of the drive when it started eating its wonderful 1GB cartridges â€“ I moved to Iomega zip disks, then CDs, and now itâ€™s an external hard disk and 8GB USB stick.

Yes, you are right, Iâ€™m not talking about networks, corporate and big budget. Iâ€™m talking about home-based business operators who juggle their business, IT, no budget, and everything else from home on one or two computers. Backing up is necessary but often too painful, so we donâ€™t do it. Or at least not often enough.

After having been burgled (aka â€˜burglarized, across the pond) I decided a more systematic, fool proof and above all SIMPLE method was needed, especially as I was looking at a project involving 4500 images, a database and continuous updates.

I did not want an archiving system. I wanted something that allowed me to create identical copies that I could access directly, that backed up incrementally and was idiot proof. Oh, and inexpensive.

I found it! And I am extremely happy with it. Itâ€™s FolderClone (made by Salty Brine Software). It does what it says on the box: â€œA ‘Set it and Forget it’ synchronization solution for Windows XP/2000/2003/Vista.â€

Itâ€™s very simple. Installation is straightforward. After that, you set up â€œtasksâ€ that make identical copies of a folder tree from one drive to another in exactly the way you want it. The rest is automated: Once configured,Â FolderClone compares the “source” folder against the “target” folder at the user defined time intervals. Changes or additions to the source folder are copied to the target folder.Â  Files and folders which exist on the target folder but not on the source folder are deleted. (Optionally, the deletion can be turned off). This process runs automatically in the background without any further user interaction required. Perfect!

I set up nine tasks (so far): I back-up all data to the external hard drive. I also back-up my main business folders (with lots of ever-changing sub-folders) to my USB stick. This allows me to carry my business in my pocket, work on it on another machine and then do a reverse back-up. Itâ€™s a three click process: open the software, click on the task(s) you want to use, then click on â€˜Run task with checkmarks.â€™Â  Done. You can fully automate it or retain manual control, which I prefer.

All this works effortlessly and fast, as often as I decide (sometimes several times a day), and best of all itâ€™s very cheap: $29.95 USD for the standard edition, which offers more features than I need.

I give Folderclone a 5 star rating.

What more can I say about Annetta’s art? Probably quite a lot in an unsophisticated sort of way. But first have a look at her site.

I’m going to pick one as my absolute favourite: 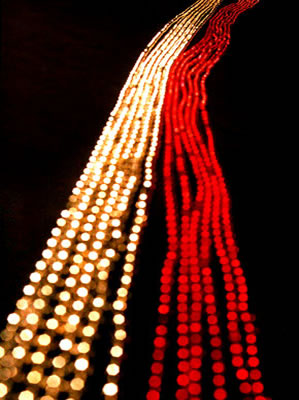 Ever since I saw not this but her video, 405 North, 405 South, any freeway / motorway, or Autobahn, is immediately subsumed under this icon. (I also know how the video was made, but that’s a secret

For reasons that someone may eventually be able to explain to me, another one of my favourites is this installation. Check it out.